February already and hopefully you now over the post-Christmas blues, or reds – if your enjoyment and spending over the festive season got just a little out of control! Here at The Male Stylist we debated whether there was more empathy in bringing you some gorgeous classic (read expensive) 2017 watch style choices or to be a little more wallet friendly. The latter won out, but this is The Male Stylist after all, so our choices, whilst undoubtedly subdued in price, remain suitably high on the style agenda.

There is a great deal of value placed in horological circles upon the ‘in house’ manufacture and assembly of movements and most of the ‘in house’ movements are, naturally in ‘high end’ watches. There is one greatly underrated manufacturer which enjoys global success and others which are ‘brands’ which in style terms are worth a hard look, not least because, actually, ‘getting the look for less’ need not mean that you are in fact buying poorly made or unreliable products.

Seiko are a watchmaker which succeeds in being ‘larger than life’ through its advertising campaigns and volume of manufacture but remains ‘under the radar’ in style terms and they do both design and manufacture their own movements. At the top end of the price range their Grand Seiko watches, in mechanical form, are justifiably lauded on horologica 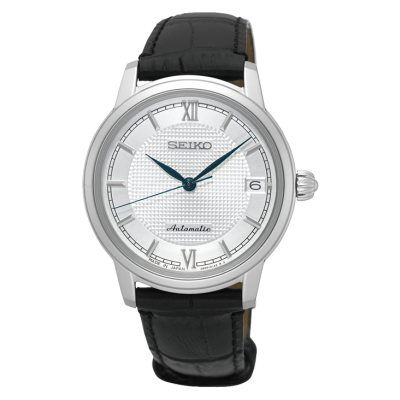 l fora, not least by no lesser person than Ask Men’s Watch Snob. However it is their more affordable ranges that are the subject of this article. The quality is invariably high and Seiko’s mechanical movements are generally simple, robust and reliable, whilst still offering a bewildering range of styles and variations, so we are going to confine ourselves to just a couple.

Starting with Seiko Presage (SRPA13J1), a simple, traditional, everyday automatic which looks far more sophisticated than its RRP of £269 (and actually available for £212- Google is your friend in this this) would indicate. Thanks to its beautifully finished face, slim hands and simple case treatment it transits seamlessly from work to leisure. At 39mm it is sized just right and with sapphire crystal glass, 100m water resistance, date window and a deployment clasp, this offers a lot of style for very sensible money. Oh and for an additional £30 it also comes in gold finish if that is your preference.

In earlier pieces we have looked at additional complications, such as chronograph functions, but one of the more useful (as well as currently popular) complications for automatic watches is the ‘power reserve’ and Seiko’s SSA305J1 offers a very cost effective option at an RRP of £379 (we found it for £352)on a stainless steel bracelet. It is a handsome 42mm diameter watch with slightly more modern styling than our previous choice. It is slightly redolent of Vacheron Constantin’s (vastly more expensive) Overseas– which is no bad thing, although the Seiko still manages to retain its individuality. We think that a simple black band with a deployment would really lift the style but you cannot deny the practicality of that brushed steel bracelet. 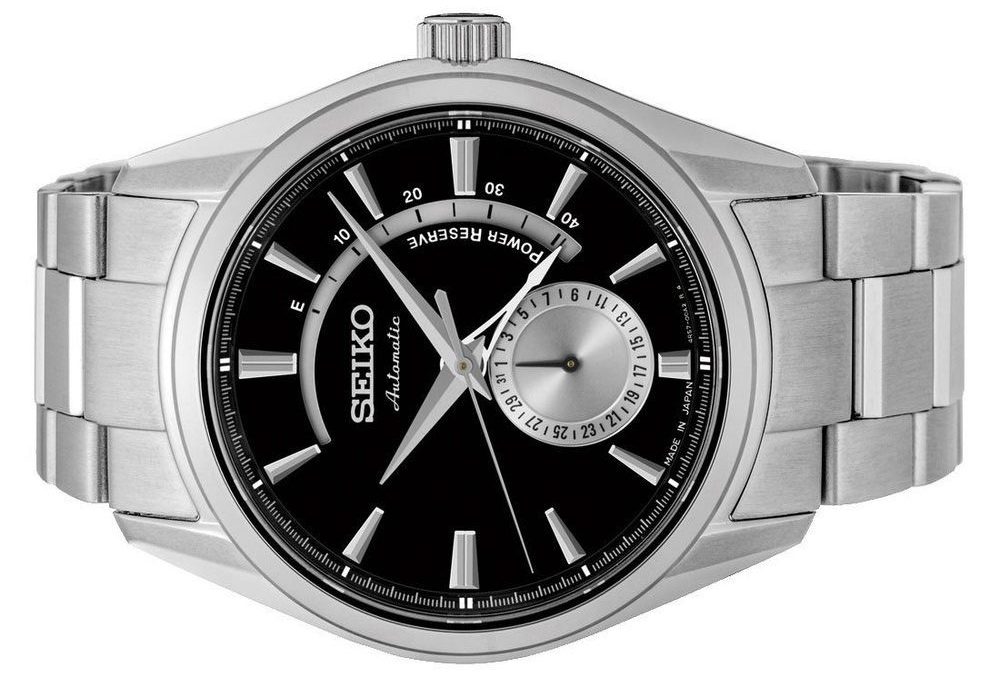 One always excellent source of affordable mechanical watches is the sometimes derisively, and always a little unfairly, so called’ House of Swatch’. The Swatch Group make some of the World’s style icon watches including Breguet, Blancpain and Omega but also are one of the largest manufacturers and suppliers of components and movements to other watchmakers. The Swatch Group’s large scale production of more generic movements (and their use by a wide variety of watch makers) through their ETA subsidiary has resulted in horological purists being less than kind, citing a pedestrian nature and lack of technical interest. However, viewing the world through the other end of the telescope, this means that tried and tested, robust movements, with and without complications, are available to both in house brands like Hamilton and Certina who produce quite excellent value for money watches across a variety of genres and external Houses, such as TAG for example; allowing us access to a variety of watch styles for a reasonable outlay. That said, using ETA movements should never be an excuse for poor design and build so carefully 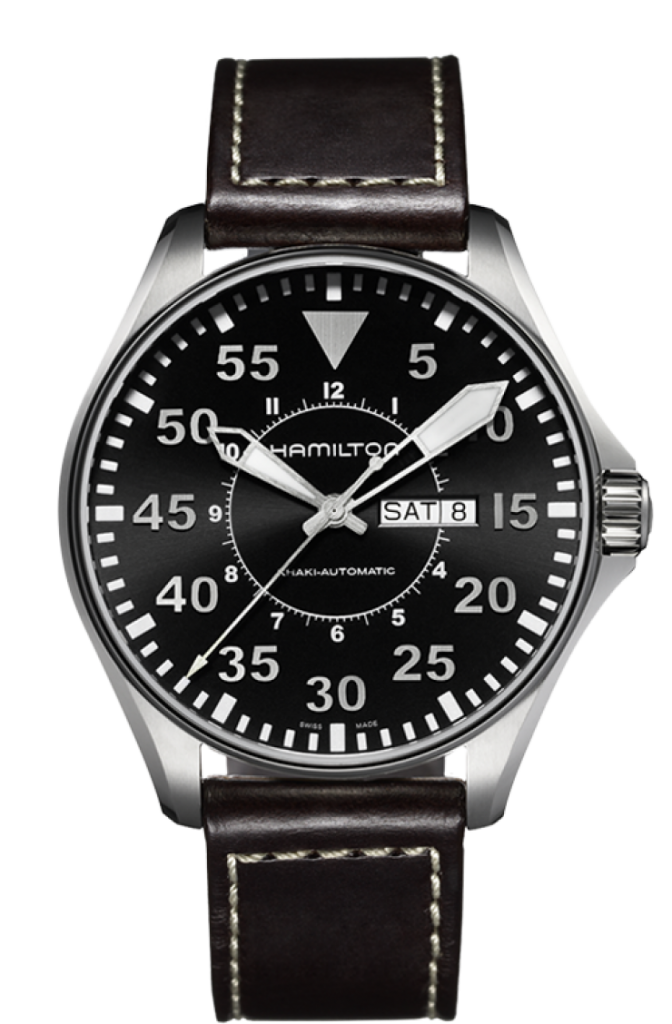 finishing casings, and adding bespoke complications, and modifications to the basic ETA modules which provide something different, as do Bremont for example, are always welcome
We have reviewed Hamilton’s wonderfully evocative reboot of their classic Intra-Matic before but it is well worth looking at some of their other offerings and specifically at their pilot range. If your taste runs to leather flying jackets then you could do a lot worse than look at Hamilton’s Khaki Automatic Pilot. This purposeful timepiece comes in two sizes a whopping 46mm or a more subtle 38mm so there should be size that works for you. Although the styling is not for everyone, and differs from IWC’s Big Pilot it is none the worse for that and
you are still getting a Swiss automatic Pilot watch for an RRP of £660. As usual, Google is your friend and we found prices from £620 – £649 easily enough. If you really like Pilots and cannot run to the mechanical version, Hamilton do offer a Quartz variant at around £350. Hamilton’s recent product placement in films like Interstellar and The Martian, not to mention Men in Black (back in the day), has made them rather better known, but you still don’t see them on every other wrist. 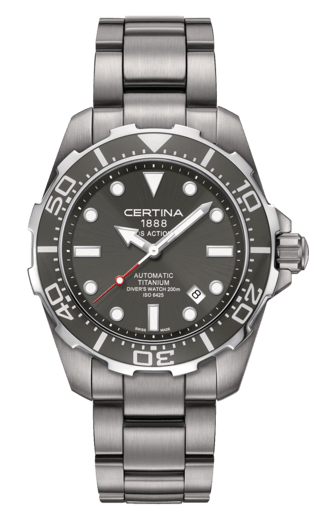 Our final choice this time is a diver from another ‘House of Swatch’ brand. This time (pun entirely intended) it is the Certina DS Action Diver Automatic, which is one of those watches which looks and feels farmore expensive than it is. Like Hamilton it uses an ETA movement and, again like Hamilton, you could (much to the distaste of purists) stretch a point and say that because the same company owns both the Watch House and the movement manufacturer that it is ‘in house’……… Perhaps not, but this diver is overlooked at your peril. On the wrist the standard of build just oozes quality and is it is probably no accident that it immediately brings to mind Omega’s Seamaster. Seen together they aren’t remotely alike but the proportions, finish and bezel detailing are just wonderful for the money. A lot of ‘diver’ watches are for desk divers only and aren’t actually suitable sub aqua tools. The Certina is different because it meets the ISO 6425 standard and is therefore officially a ‘proper’ diver’s watch. The water resistance has been tested for three hours underwater so whether you really want to take it scuba diving, or just snorkelling on holiday, it is more than capable. Available black, blue or the subtle and expensive looking anthracite, pictured here, this is officially a bargain at the £595 one online retailer is currently selling it for.