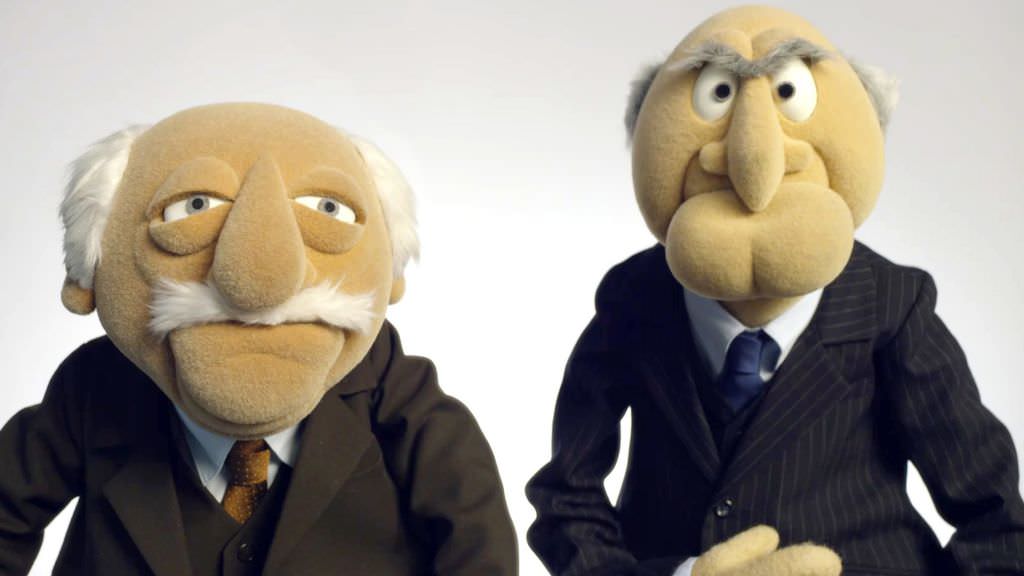 Just to preface this post, I’d like to note that I do respect the elders that I know. I have a great deal of love and respect for my family, friends and co-workers who are of an older generation than me, due to the fact that I know what kind of people they are and where their values lie. My issue here is with the generic blanket statement “respect your elders” and how I’ve decided to reject this philosophy in recent years, simply because I don’t believe they respect/care for younger generations any more.A Little Context

I consider myself to be someone who accepts and embraces people of every race, religion, gender etc. I am genuinely interested in discussing the opinions of other people in an attempt to broaden my own understanding of the world in which I live. However, in recent years I’ve found myself systematically rejecting the baby boomer generation (and earlier) and the idea that I should respect them simply because they are older than I am. I’ve lost faith in the idea that my elders want the best for me as the millennial generation is left worse off than their parents’ generation, with the bill for most of the damage caused.

Why? Well, because 2016 and 2017 have both shown the incredible selfishness and ignorance of the majority of older people in the US and the UK.

Politics: Showing The Truth Through Lies

Brexit was a big turning point for me. I was up at 5am watching the deciding votes come in and seeing the split between old and young people’s voting intentions (below). I’ve never felt so angry and upset in my life as the idea that older generations didn’t care how many opportunities or how much freedom was being taken away from their children. I remember being sat on the train that morning trying to figure out who was a “Leave” voter and scorning them in my head. I confessed this new habit to a close friend of mine over a drink that evening and his words stick with me to this day. 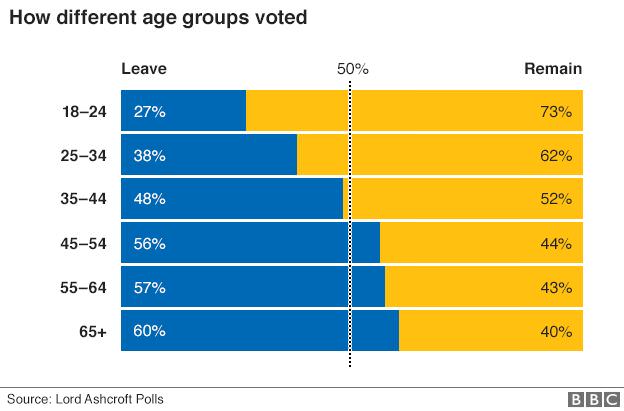 Then November rolled around and, after having been burned by Brexit, I sat there cynically watching the television as pundits claimed Hillary had the win. My aforementioned friend and I were expecting the worst and next morning we had the confirmation. Trump had edged his win based on a majority of older voters and an antiquated electoral system. Young people had hoped to elect the first female President , whilst people 45+ years old decided to elect a known molester who had spouted bigotry and hatred throughout the entirety of his campaign. 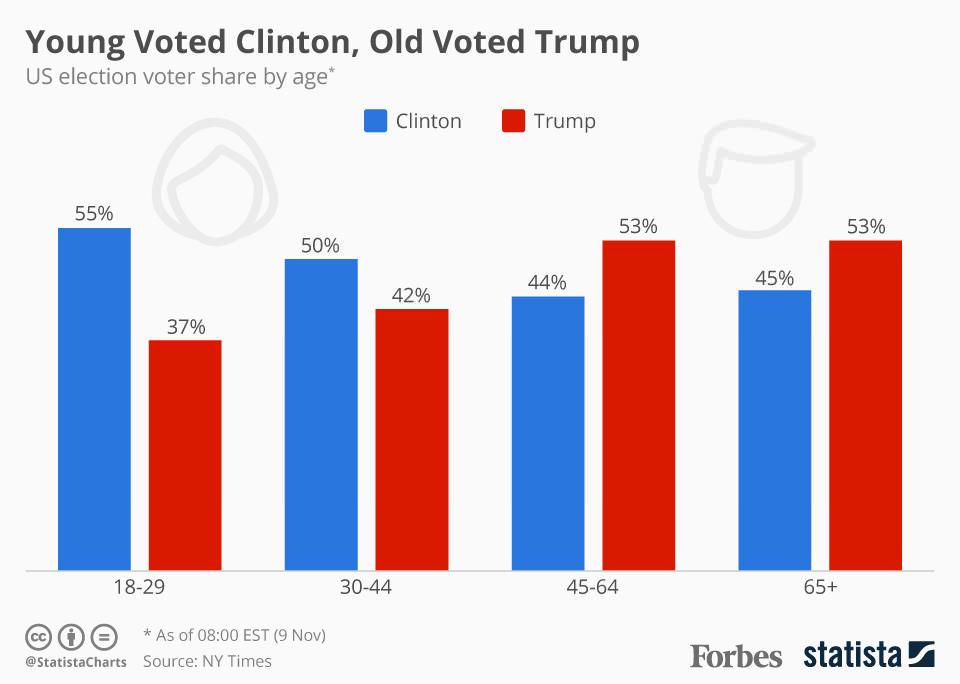 The question I kept coming back to was “Why?” What made older generations want to actively ignore their children, instead demanding instability and conflict?

Taking From The Young

Earlier this year, Ipsos Mori released a research paper entitled “Millennial: Myths and Realities”, which delved into the facts and fiction of the millennial generation. The first point of the research goes into money and, somewhat unsurprisingly, the first line of this is, “millennials are the first modern generation to be worse off than their parents.” The factors behind this include, paying for an aging generation, increased housing costs, rising government debt and higher youth unemployment.

The study goes into different areas showing how millennials have been frozen out of the housing market not just because of decreasing real incomes (i.e. accounting for inflation) whilst having to rent for longer, as rent prices continue to increase and house prices continue to grow (up until very recently). It makes for pretty grim reading if you are a millennial but is also a commentary on older generations not investing in what is being referred to as the “Forgotten Generation”.

“What About All The Good The Baby Boomers Have Accomplished?”

This is a fair point and one I have never dismissed. There is a great deal that the baby boomer generation did well, the growth of the internet and attempting to close the equality gap between men and women, for example. However, my response to this has always been if you take credit for your achievements, you cannot ignore your mistakes. This idea that you can sweep your sins under the rug by quoting you best moments is farcical and shows the genuine naivety of older people.

The truth is that millennials are being left with a socio-political mess to clean up and we are being asked to say “thank you” and then shut up and I, for one, will no longer stand for it.

The Truth: As A Generation, They Don’t Care About Us

This is the harsh reality of what 2016-17 has shown us, that the older generations don’t care about what’s left to us, they care about how that affects them and if they are comfortable with it.  It’s not that their actions are particularly malicious or are trying to harm our future, they just don’t care if the consequences do hinder us.

So, here I am. 15th November 2017 stating that I don’t respect my elders anymore. From now on, I’m falling back on the idea that “actions speak louder than words” and right now the actions of baby boomers are not worthy of respect.

As for us millennials, it’s time to roll up our sleeves and get to work. Keep cleaning the oceans, keep eating healthier, keep donating more to charity and keep fighting to save the planet. We can’t rely on anyone else now and we’re on our own, so don’t waste your time respecting those who don’t respect you.

Thanks for checking out the post and let me know your thoughts on what you feel about millennials. In the meantime, you can also sign-up to be notified of new posts and follow The Male Stylist activity. Also, don’t forget to follow me on Twitter or Instagram for style inspiration, gentleman’s musings and general fun. You can also check out my post on Why I’m Proud To Be A Millennial…