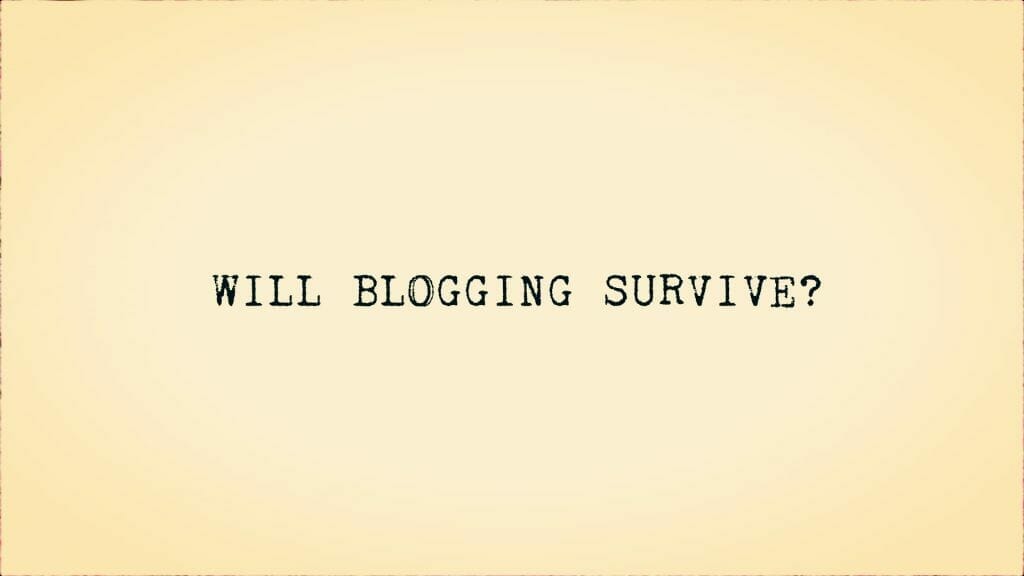 Blogging (in it’s current form) is reaching its early teens, with many of the biggest having been around for nearly 15 years. It’s an industry that has seen very low barriers to entry and increasingly higher returns, resulting in an explosive growth of online bloggers, vloggers, social media influencers, internet personalities and digital trendmakers. It’s contributed to the popularity of social media and drawn many benefits from it, become a key part of the fashion, beauty and tech industries and is currently seen as a legitimate career by many children/teens despite the cynicism of older generations.

However, the blogging/influencer industry is in danger of crashing and doing so in spectacular fashion. Every single market goes through boom and bust periods and ours is no different. The question is, are we willing to evolve, adapt, learn and change to survive? Are we willing to accept some truths and learn the risks? Or will we struggle and fragment, leaving the blogging industry to fade into history as another trend that didn’t go the distance?

Businesses Will (Unintentionally) Kill Off The Majority of Influencer Marketing

If working in digital marketing for 7 years has proven one thing it’s that when a business finds a single strategy successful, they will do it to death. Influencer/blogger marketing has been going through a period of great growth and prosperity, with brands pouring money into new strategies that incorporate bloggers, vloggers and instagrammers into their overall marketing strategy. They do this because it is the “in thing” that works (though more on whether that is necessarily true later).

Great marketing is based on creating a new idea or re-thinking an old one. Easy marketing is re-hashing the same successful ideas and not taking risks. Influencer marketing was once a great marketing strategy, the idea of bringing in someone (with a large number of followers who trusted them) to grow exposure for the brand and drive sales. However, as more and more companies have adopted it, it’s become an over-saturated strategy with more stringent rules on labeling sponsored content and users gaining more clarity on whether to trust an influencer’s opinion based on said labeling.

The issue here is that most brands are looking for a sure-fire way to get their products/services out into the world, so when one comes along they will do it over and over again until it no longer works, regardless of the impact on the channel itself. However, the more regularly it’s used, the more numb consumers become to it and, as a result, they tend to switch off from the message. If you need an example of this happening in real life, look at the way Facebook is rapidly losing its younger audience after years of ad bombardment and promoted brand posts.

This one is tricky as content creators, by their very nature, need to be promoting and pushing themselves in order to gain visibility. From the first moment we step into this business, we need to make our voice as loud as possible and are constantly told to “know our value”. I can (and do) completely empathise with this approach, we all need to understand how valuable we are, both as individuals and as a group, so as not to undervalue our work. We must ensure that we are not taken advantage of by businesses and mis-sold on ideas of “exposure” or “future opportunities”, otherwise we risk the possibility of content creation becoming too cheap to sustain a full-time career.

However, recently we have seen that we can sometimes overvalue ourselves and are not afraid to devalue other people’s work for the same promise of exposure. One of the most public examples of this was seen earlier in January when an online dispute broke out between a blogger and a hotel after she had contacted them requesting from accommodation in exchange for a feature in her video. I’d like to be clear in saying that I believed this was handled badly by both parties and that it’s a shame to see this kind of conflict arise between creators and businesses but one of the key issues here was how a content creator potentially undervalued a business’s work.

In order to be taken seriously and survive, we need to be careful about the image we project to the rest of the world. The above story made mainstream news headlines and didn’t show either parties in a particularly great light, though most people know not every hotel behaves like that many aren’t fully aware of the “influencer” industry and its workings, so this could be a bad first impression for many. However, if we can show that we are willing to open a dialogue, discuss and negotiate then we prove to the rest of the world that we are mature enough to understand that value is, in many ways, subjective but we are open to conversation.

I’ve seen a great deal of social posts about how blogging requires a multitude of skills including writing, photography, social media management, financial management etc. I do not disagree with this and blogging has taught me a great deal of new skills. However, I’ve also seen some bloggers saying that they are “photographers, writers, journalists, social media managers, accountants” etc. and I feel this is a dangerous way to alienate a lot of industries.

We dabble in a variety of skills in order to run our blogs but we do not experience the full spectrum of what is required to be each of these things respectively. An accountant must go through years of training and exams to gain the necessary qualifications, a photographer spends their whole career building a portfolio (often behind the lens, not in front) to gain recognition, writers and journalists must publish constantly to survive let alone be “recognised” and social media managers have to deal with the problems of navigating an organisation’s reporting, brand messaging and orders from superiors.

I do not doubt that blogging requires a great many skills and large amount of learning, but we are not multiple careers in one. We are our own industry and we have our own careers within it. Claiming anything to the contrary could result in us slowly being edged out by other industries/professionals.

We Must Be Ready For The Crash

As I said at the beginning, every industry experiences highs and lows the great boom eras and the depressions that see huge companies fail. The blogging industry has seen nearly 20 years of growth, with the last 5-10 years being some of the highest growth years ever. This won’t last forever.

Whether it’s because of one of the above points, a social media platform folds or people simply lose interest, there will be a period of shrinking where budgets decrease/disappear, big bloggers will leave the industry and it becomes a much less attractive career choice. Those who know this have begun to diversify what they do and specialise in key areas in an attempt to future proof themselves against this moment. If you don’t believe me look at MySpace, Napster, Yahoo and AOL. All giants of the internet who didn’t diversify or innovate and so fell into unpopularity and disappeared as quickly as they started.

We are not permanent and understanding that fact is what will help us survive.

Thanks for checking out the post and let me know your thoughts on what you feel about your blogging career and the industry as a whole. In the meantime, you can also sign-up to be notified of new posts and follow The Male Stylist activity. Also, don’t forget to follow me on Twitter or Instagram for style inspiration, gentleman’s musings and general fun.